Well, A24 may have done it again. It’s been six years since I have seriously considered watching anything that resembles a horror movie.

In 2015, I was enthralled and creeped out by Robert Eggers’ “The Witch.” In 2021, “Lamb” seems to have nestled in a similar eerie, interesting pastoral niche, despite protestations from the director that this is not a horror movie.

To be fair, I’m not the only one who has drawn this comparison. David Rooney’s review for The Hollywood Reporter makes a strong case. In his take for The Spool, Theo Estes notes similarities in the muted visuals and spare score are very similar to “The Witch,” while Jesse Hassenger argues for the AV Club that many of these comparable elements are primarily surface level.

Before reading further, it’s important to know that many “Lamb” reviewers (and director Valdimir Jóhannsson agrees) believe that context destroys some of the power of the film.

“I remember some [critics] were just saying you should know as little as possible before seeing the film and I think that it’s true,” Jóhannsson recalled to Variety’s Marta Balaga for coverage of the film’s reception at Cannes and the Karlovy Vary Film Festival.

“Lamb” unfolds steadily, in three phases. I’ll try to keep spoilers limited to the first segment, but for some readers even that may temper the surprises.

In his interview with Balaga, Jóhannsson describes an intention to make an arthouse film rather than the horror-adjacent movie it has been billed as in North America.

Cultural differences are perhaps driving some of the confusion; the supernatural elements that have garnered the most attention are accepted aspects of life in Iceland.

Jóhannsson tells Balaga, “I know many people who claim to have seen elves and ghosts. I haven’t, but it would be ridiculous not to believe them. Why would I just reject it? When I was a child, it was just a part of our life. We have all heard these folktales — it’s who we are. In Iceland, we are surrounded by this harsh nature and whenever a volcano erupts, there is nothing we can do. It’s just nice to believe in something sometimes.”

That almost pragmatic suspension of disbelief plays out in the movie itself, and in the creative process that surrounded the filmmaking.

It’s perhaps not surprising that a movie with scant dialogue was first conceived and conveyed primarily via imagery.

Jóhannsson explained to Screen Daily’s Wendy Mitchell, “I was inspired by so many things: films, folklore, books, paintings, images.”

But when the idea began to actually take form, he says, “I started to create a sort of sketchbooks with some elements of the story and drawings, and then I took this to my producers [among them his wife, Hrönn Kristinsdóttir, and step-daughter, Sara Nassim] and they introduced me to Sjón [Icelandic author and poet] and we discussed this book I had made. After that, we talked about the ideas for a few years and wrote the treatment, and then Sjón took over and wrote the rest of the script. It was a long process but very organic.”

READ MORE: Jóhannsson on the inspiration behind ‘Lamb’ (Screen Daily)

Movie Maker’s Caleb Hammond learned more about the process in a joint interview with Jóhannsson and Sjón. They discussed how the pair turned Jóhannsson’s lookbook into a coherent idea, and then, over the course of a decade, took the seed of that concept and transformed it into the script for “Lamb.”

From his perspective, Jóhannsson says, the scrapbook “was trying to create some mood for a film that I wanted to do. But the story was not there. Sjón is my favorite writer. I knew that it would be great to work with him because his work deals a lot with mythical folktales. So we met for coffee, and I showed him this book.”

(Imagine getting to make a movie from scratch with your hero!)

Sjón indicates he relished the source of inspiration and the challenge. He told Hammond, “I was so enthusiastic about his book of drawings, references and collages. He had cut lamb heads out of photos and glued them to children’s bodies. I was so excited about it that we started just a week later.”

Of course, that auspicious beginning did not translate into a speedy process. The pair began with three-hour weekly meetings to discuss the nascent project.

When you consider that this was the starting point, perhaps, it’s a bit understandable. Per, Sjón : “We started searching for a story that could make it possible that you would get this image of a woman holding a child with a lamb’s head, he explains. “That was the first task: Was it possible to come up with a story that was credible, that would somehow make this real, at least to the person holding the lamb?”

For those familiar with the world of folk or fairy stories, you’ll note that most are not the sanitized versions venerated today. The supernatural is constant and full of dread and import, but also a  given in the lives of the characters (and sometimes, of the lives of the tellers and the audience). 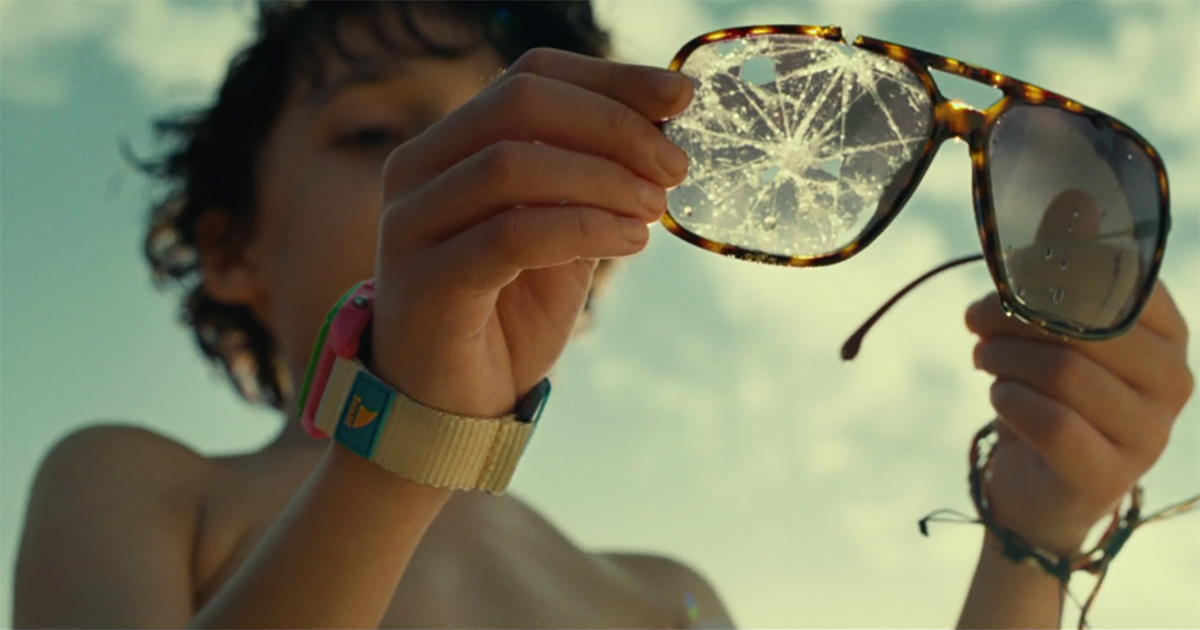 But before the supernatural could play its part, Sjón and Jóhannsson knew they needed to create a compelling narrative for the humans that would help the audience be invested in the protagonists, who ultimately behave in a way that seems odd to an interloper.

Sjón explains that, if they were successful in their draft, the audience “would be so occupied with the emotional story going on — even with these people who can’t share their emotions who almost don’t speak — that you would be in the right place for the creature to be completely believable in the story. You would accept that they take it on as a task in their lives”

READ MORE: Lamb Started Out as an Experiment in Filmmaking (MovieMaker)

Although shooting in Iceland has been in vogue for big budget features for some time now, it’s still unusual for a film that was written, directed, produced, acted, and crewed almost exclusively by a team with roots in the country to make such a big splash internationally.

But, fortunately, such is the case for “Lamb,” which relies on much more than the nation’s stunning and remote landscapes for its success.

Not only was the movie co-written by Jóhannsson and Icelandic creative Sjón, the actors (human and animal alike) were either Icelandic natives or had strong ties to the country.

Actors Hilmir Snær Guðnason (Ingvar) and Björn Hlynur Haraldsson (Pétur) are both Icelandic, and Jóhannsson had cast Guðnason on his prior short film, “Dawn.”

Even Swedish actress Noomi Rapace, who portrays the character of Maria, spent much of her childhood in Iceland and spoke the language prior to embarking on the project.

All were able to draw on their backgrounds for this project.

In fact, some of the earliest scenes in the film also reflected Rapace’s familiarity with both Iceland and farm life. On her first day on set, Rapace “went all in. Both the scenes where she’s driving the tractor and delivering lamb, it was the first day, because she came only one day before shooting,” Jóhansson recalled to Below the Line’s Edward Douglas. “But she grew up at the farm in Iceland, and they had horses and I think two pigs, a dog and a few sheep. She had not delivered a lamb before, but she just saw the farmer do it, and then she just did it. She’s amazing.”

According to an email shared by A24, Jóhansson writes, “I directed two short films before Lamb, and have been active in the film industry for about 20 years as a crew member in all different departments: art, SFX, lighting, animal wrangling and more. So when I made Lamb, I knew the crew very well from my days on set with them, standing in rain storms for many hours or spending days in the dusty highlands filming big studio films.” That filmography includes 2012’s Prometheus, which also starred Rapace as Dr. Elizabeth Shaw, who did not remember Jóhansson as a crew member, Jóhansson points out.

In the same email, he points out that his brother Jóhansson’s brother Helgi served as location scout, as well as an animal trainer. Other members of his family also played important roles in the production. His wife, Hrönn Kristinsdóttir, and step-daughter, Sara Nassim, were producers (although not Icelandic, it’s notable that Béla Tarr served as executive producer, as well). His son-in-law Eli Arenson was the cinematographer. Elder daughter Sigrún served as production coordinator and younger daughter Elsa worked as chef’s assistant on set.

“I sometimes thought about the absurdity of this but in the end I couldn‘t be more happy to have had the people that I love and trust the most, surrounding me during the difficult yet joyous journey of making Lamb,” Jóhansson writes.