Listen to the Interview

Lori H. Schwartz continues our Web3 Amplified series, this time in conversation with Barbara Marshall. They dive into the technology that creatives will need in order to make the metaverse possible, explore business models, and consider how far we are from the reality of a true Web3.

At HP, Marshall’s work focuses on the workstations used by visual effects, animation, broadcasters, video post-production companies and other M&E roles that require a lot of compute power today.

What We Don’t Know *Yet* About the Metaverse

First, Marshall notes that computers are necessary to create “the digital world in whatever form it takes.” When you’re talking about a graphics intensive digital environment, what many are now referring to as the metaverse, a category of computer known as workstations are required. HP “obviously has a part to play in creating the computers that enable the creatives to create the metaverse.”

Those are the known, basic elements of this Web3 conversation, according to Marshall.

Whether or not the metaverse will be “one huge digital replica of the world” or there might be multiple metaverses, each different in form and function (per Marshall, the latter seems to be the general consensus).

As of late 2022, some movies have begun “exploring the concept of these digital worlds that people can immerse themselves in,” Marshall says, citing “Avatar” and “Don’t Worry, Darling” as recent examples.

But M&E isn’t alone in exploration of the metaverse’s possibilities — and that’s where things are going to get exciting.

The Business of Web3

There’s a lot focus on how individuals will experience the metaverse and benefit from Web3, but Marshall says, “Web3 isn’t just about consumers. Web3 is about business to business, the interoperability and, hopefully, open standards and open formats and open content that enables businesses to share and benefit from other companies’ work or organizations’ work.”

Marshall says she’s excited by one element of Web3 in particular: “interoperability, open source of convergence, true convergence between the different industries, because we’re actually creating the same assets just for different purposes.”

The construction industry and related fields like engineering and architecture are dipping their toes into metaverse technologies to further their work, building on the 3D models and master plans they’ve created for years.

In terms of the near-term impacts of the metaverse, Marshall isn’t exactly bullish: “I’m a bit of a skeptic. I think there’s a lot more hype than reality going on at the moment, but I think it’s important to explore what the options are, and think about where this could take us.”

For HP, that means collaborating with software and entertainment companies who are already vying to be major players in the metaverse. It also requires executives to have an open mind and a willingness to experiment.

“Some of the things that perhaps people are experimenting with today aren’t going to stick, because at the end of the day, there has to be a business model behind whatever we do. And I don’t think anybody’s clear yet what the business model is, what’s going to stick and be viable in the long term. And what isn’t.”

The Road to Web3

As we transition from Web 2.5, it’s important to remember that the internet as we know it has always been evolving. The foundation of the modern Web was laid in the 1960s, but we didn’t start to see Web 1.0’s full potential until the 1990s.

“None of us really know where we’re headed, but there are all sorts of possibilities, and we’re all exploring what those possibilities are.” 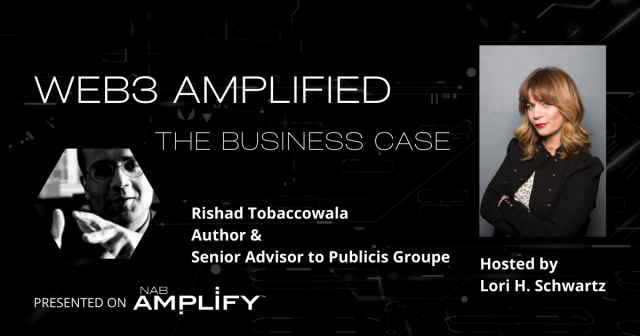 Lori H. Schwartz interviews Rishad Tobaccowala about Web3 and how it will reshape the business of media and entertainment and the workforce.