Based on a 2016 short story by Alexander Weinstein, After Yang, directed by South Korean-born American filmmaker Kogonada, explores a new take on sci-fi’s eternal Turing question: Can a robot have a soul? Do androids dream?

“A lot of times when a story deals with this kind of subject matter, it’s about an AI wanting to be human,” the director told Deadline. “But in this case, it’s about a human trying to make sense of the loss and value of a non-human being.”

READ MORE: How ‘After Yang’ Director Kogonada Explored The Hidden Stories Of A Sci-Fi Drama: “I’m Often Curious About The People In The Background” (Deadline)

The film stars Colin Farrell as Jake, the father of an adopted Chinese girl who buys an android named Yang to teach his daughter about Asian culture. But when the android breaks, Jake finds himself considering more than just the cost of repair.

“It’s not a science-fiction film that’s concerned with hovercraft and lasers and space travel,” Farrell says in the film’s production notes. “It’s grounded in a world that should be recognizable to all of us. We talked about it being on the brink of some cataclysmic global climate event, which led a return to a hybrid of urban and rural. It had taken hold within the cities of the world, where people had started growing their own crops on rooftops.” 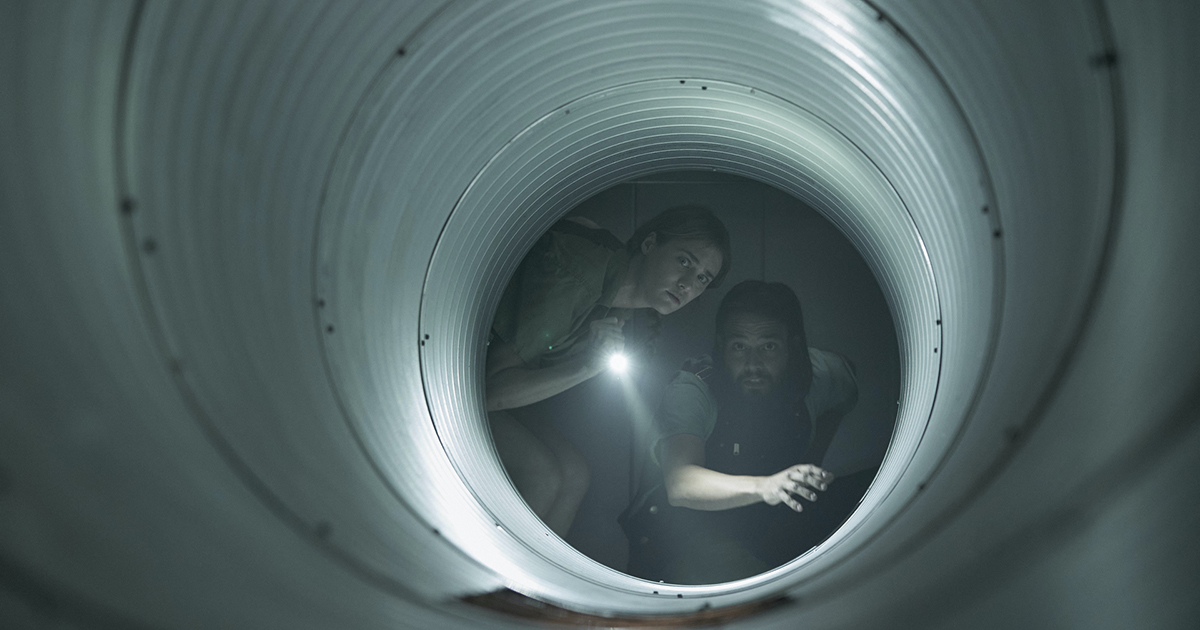 How I Learned to Stop Worrying and Love the Apocalypse

Uniquely for a film set decades from now, After Yang takes place mostly in a family’s home: around the kitchen table, in low-lit bedrooms and hallways. This lo-fi aesthetic, reminiscent of Jean-Luc Goddard’s Alphaville (1965) by way of Alex Garland’s Ex Machina is part of what makes the film so appealing.

More than one article on the production’s design has pointed out Kogonada’s use of “geometric shapes, stacked boxes, and asymmetrical lines to add warmth and definition to the family’s open floor plan.” Slashfilm notes.

“He also uses meticulous composition and deliberate blocking to enhance the characters and their journeys; in one deep focus shot that takes place in a dimly lit, backroom chop shop, Jake steps from the farthest reaches of the frame into darkness in the foreground as he tacitly agrees to continue down the path he’s on.”

Kogonada, who made the equally exquisite 2017 indie Columbus, “loves a wide shot that reveals the architecture of his spaces, allowing characters to creep into the frame almost surreptitiously,” purrs Thrillist. “It’s a style that matches the way Konogada unravels the layers of Yang’s history, opening up doors that Jake and Kyra never knew existed… Like Columbus, After Yang uses minimalism and architectural spaces to craft a detailed, serene, and lush atmosphere that feels immensely warm despite appearing to be cold and distant at first glance.”

READ MORE: ‘After Yang’ Is a Stunning Sci-Fi Fable About Identity and Humanity (Thrillist)

Cinematographer Benjamin Loeb (Mandy, Pieces of a Woman), recalls bonding with the director over their mutual love of medium and wide shots, especially those by the master Japanese filmmaker Yasujiro Ozu.

One of the biggest questions sci-fi cinema asks is “What does it mean to be real?” From Blade Runner to the Matrix movies, filmmakers have sought to address this complex subject in a number of innovative ways.

“Robotic life forms, clones, or rogue AIs are merely high-concept metaphors for the human condition implanted with the systemic socio-political issues that scourge society (like discrimination, oppression, and exploitation),” Collider’s Jackson Winston-Schrader contends. “Cloaked in popcorn-fueled, VFX dramatizations — sci-fi cinema forces audiences to analyze the various moral impediments of our shared humanity and the meaning of our existence, often to a heart-wrenching degree.”

He argues that South Korean director Kogonada’s After Yang is one of the most heartbreaking takes on the thorny issue of Artificial Intelligence, and lists the six other essential sci-fi films about synthetic lifeforms that will “make you contemplate what it means to be alive, to be sentient, or to be mortal.”

From start to finish, Never Let Me Go surrounds “viewers in a doom cloud of heart-wrenching existential dread,” Winston-Schrader reports.

Adapted from the novel of the same name by Kazuo Ishiguro, screenwriter Alex Garland and director Mark Romanek create a world Winston-Schrader calls “relentlessly depressing, but its brutal poignancy is beautiful nonetheless.” In this dystopian world, Kathy (Carey Mulligan), Ruth (Keira Knightly), and Tommy (Andrew Garfield) work through their own life choices and what really matters to them after learning their true purpose as clones.

“The film is a contemplative and somber character study on the meaning of one’s existence, identity, love, betrayal, and the ethical shortcomings of humanity’s insatiable need for immortality.”

The heartbreak Tron: Legacy delivers stems from the toxicity of online subcultures and the digital frontier, Winston-Schrader explains. Director Joseph Kosinski’s film waxes poetically “about the meaning of life and creation, the insidious nature of corporate greed, the foolhardy pursuit of unobtainable perfection, and the paranoia-induced fear of technology exceeding humankind’s grasp.”

Kosinski’s “open-source vision meticulously renders the granular nuances of the human condition, mortality, self-awareness, and the ideological and ethical complexities of technological escapism.” While it didn’t capture audiences immediately, it’s a film that challenges what it means to be real. “Tron: Legacy proposes that life has the unobstructed space to flourish without human interference, whether digital or physical.”

He touches on how the film produces a unique vision of an AI-assisted future with social commentary of modern romantic relationships, online dating, and our overconsumption of user-friendly technologies. The “particularly devastating” scene where Samantha leaves Twombly “echoes universal truths about heartbreak.”

Winston-Schrader is brutally honest in his recommendation of A.I.: “It’s a movie that’ll pry your heart from your chest and beat you into submission long after the credits roll with its dreadful nihilistic cynicism.” Ouch.

Winston-Schrader calls Steven Spielberg’s sci-fi odyssey an amalgamation of Stanley Kubrick’s 2001: A Space Odyssey. In a future where technology and robotics strip us of our humanity, where innovation outweighs ethics, “A.I. is about the loss of innocence and what it means to be truly human.

“If that doesn’t bring you to tears, then nothing will,” Winston-Schrader declares.

Screenwriter Alex Garland’s directorial debut Ex Machina “perfectly synthesizes the errors of Silicon Valley and how any being born within the bondages of an oppressive force will always find a way of freeing themselves.” Winston-Schrader suggests that “the film postulates how human-based achievement within the robotics and AI fields will ultimately lead to our demise, exponentially evolving beyond our control due to short-sided male egos.”

Ava (Alicia Vikander), a “gynoid” imbued with advanced AI, manipulates Caleb (Domhnall Gleeson) to achieve her goals. Her “need for autonomy outweighs a need for love,” he writes, to devastating effect. The film may be gutting, but Winston-Schrader proposes that we should not necessarily fear AI, but instead fear the people who create it.

Although targeted at kids, WALL-E‘s “view of the future is chilling, foreboding, and the film rarely shies away from its weighty adult themes,” Winston-Schrader insists.

WALL-E is a small robot with a minimal vocabulary, but his voice rings clear as expressed by his actions and how he treats the world around him. Winston-Schrader calls it “an earth-shatteringly bleak film, for any movie, but especially for Pixar.

“Rough around the edges, but full of lovable soul and honesty, WALL-E perfectly reiterates how following one’s heart will always override one’s directive.”

“We talked a lot about the relationship between emotions, human beings, and space,” he says in the film’s notes. “I’ve been in a lot of situations where a director will say, ‘This is an emotional moment so we need to be close on the face so we can see the eyes,’” Loeb says. “To the contrary, that actually harms the scene in some ways. Body language, emptiness, clutter — that’s really how my conversations with Kogonada sparked.”

Loeb reveals he was a late addition to the film’s production, telling Filmmaker Magazine that in a phone interview with Kogonada “we spoke for hours about everything but the movie. We connected on the topic of emptiness or absence in cinema, as well as space and its relationships to human beings and how it relates to emotions. I think we both just felt like this was a conversation we wanted to keep having, and the next week I was hired.”

READ MORE: “You Have to Become Vulnerable With Your Director Before You Can Go On Set”: DP Benjamin Loeb on After Yang (Filmmaker Magazine) 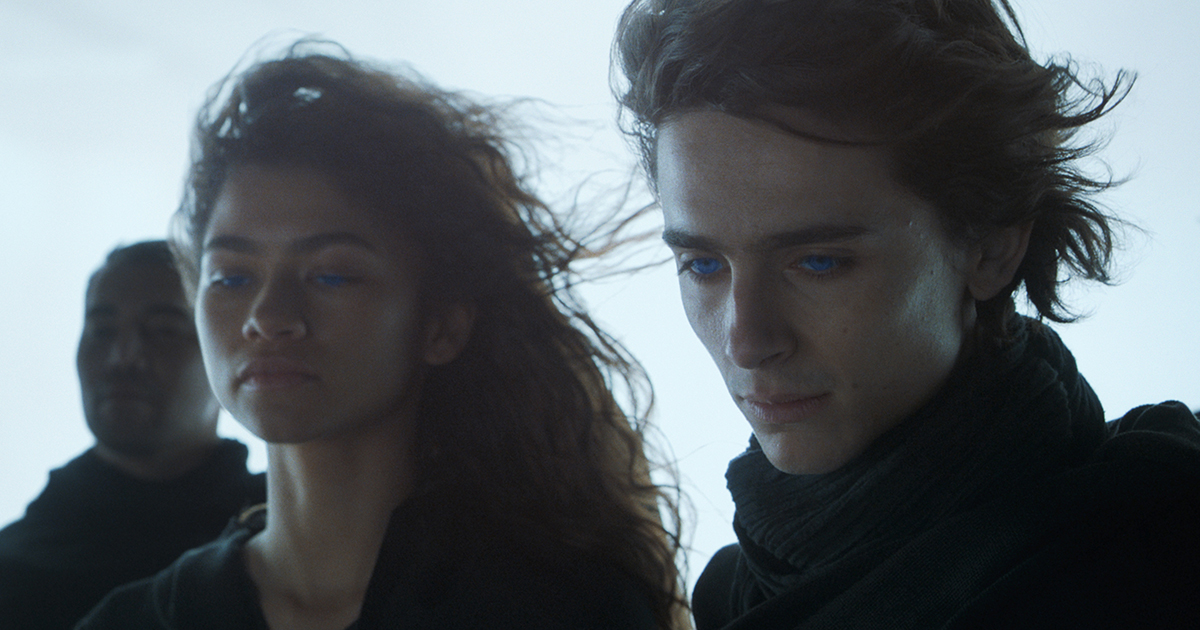 After Yang delicately observes the relationship between humanity and technology. In this world, advanced technology, like self-driving vehicles and “techno-sapien” androids robots purchased as live-in babysitters, and nature have been weaved together to create a space where androids and humans can coexist. Here, people aren’t only dependent on technology, but literally consider it to be vital members of a family.

By all accounts Kogonada enjoys an encyclopedic love of movies and has previously crafted short essay-films, many of which can be found in the supplemental features of the Criterion Collection, focusing on directors as varied as Wes Anderson, Terrence Malick, Darren Aronofsky, Hirokazu Kore-eda and Federico Fellini.

In After Yang, he buried some easter eggs for just for cinephiles. Among them: Jake quotes a passage from an obscure 2007 documentary, All in This Tea, directed by Les Blank and Gina Leibrecht, during which Farrell gives a Werner Herzog impression.

“Colin actually has a top-shelf-level impersonation of Herzog that he determined he had to bring down a notch, because someone like Jake wouldn’t have it,” Kogonada reveals. “It’s his half-Herzog.”

A recurring song in the film is “Glide” from 2001 cult Japanese film All About Lily Chou-Chou, while a theme by Oscar-winning composer Ryuichi Sakamoto (The Last Emperor) forms part of the score.

He also tonally references Ozu’s classic Tokyo Story, saying, “One of the many things I love about [the film] is that it’s partly about the devastation of the city after the firebombings of World War II. 100,000 dead. A million homeless. None of this devastation is ever mentioned, nor do we see much of postwar Tokyo. But the film is haunted by a profound sense of loss. It’s a ghost story disguised as a family drama.”

Want more? Watch the creative team and cast behind After Yang in a panel discussion about the making of the film moderated by Variety’s Brent Lang for the Variety Studio Sundance series:

Director Kogonada speaks with USC robotics professor and AI expert Maja Matarić at the 2022 Sloan Film Summit about the reality, fantasy, and speculation within the After Yang:

You can also watch Kogonada discuss the making of his film at the American Film Institute: 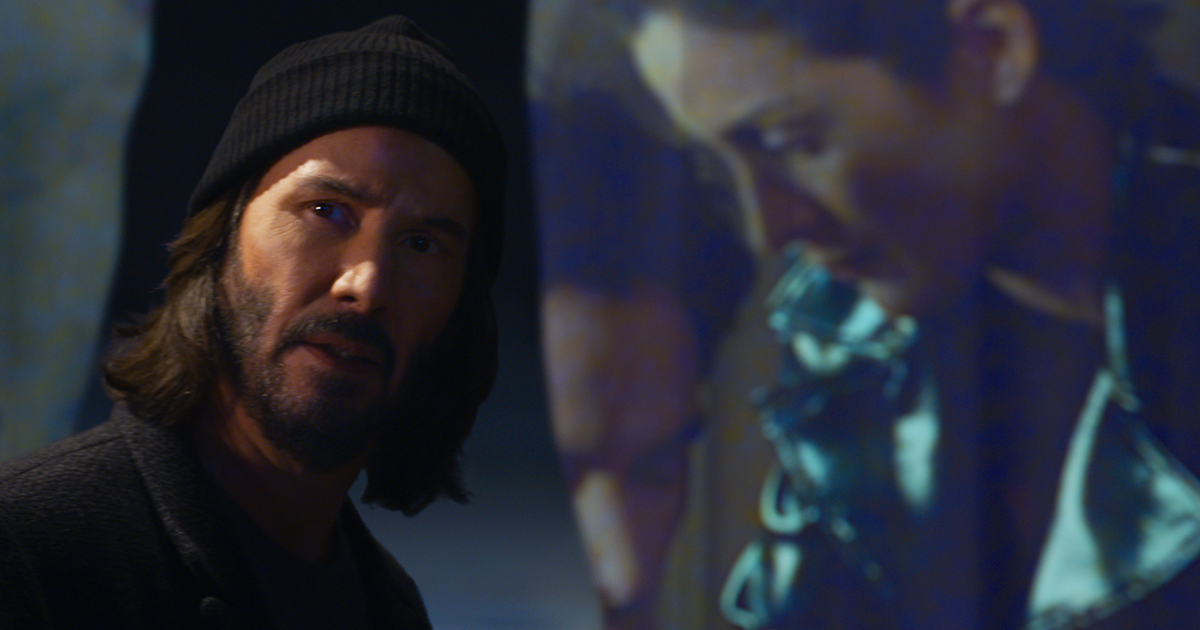 What You Can Learn From the Visuals in “The Matrix Resurrections”