Has Elon Musk made billions by writing a simple Tweet and casually inflating the stock price of shares he owns? Is the value of Jeff Bezos’ Blue Origin flights about furthering space research or selling the Amazon brand? Richard Branson was at one time considered a marketing genius for linking daredevil missions to fly round the world in a balloon with his airline and train operations.

Malcolm Harris, in his piece for New York Magazine, considers how — in the age of the social media influencer — owners of products can ascend from start-up to billions in an exceptionally short timeframe.

“The end goal is a big pool of capital in the sky, either the public markets or one of the institutionally owned conglomerates. Whether the product is any good is largely irrelevant,” Harris writes.

“Convincing people to buy something regardless of its underlying value is the job description of our era’s version of the celebrity spokesperson: the influencer.”

Harris takes aim at the “emperor’s new clothes” aspect of the whole scheme by examining a number of high-profile deals between brands and influencers. For many influencers, it’s hardly a rags-to-riches story. Celebrities are often chosen to endorse products precisely because they are already minted.

Take George Clooney, who sold the super-premium tequila brand Casamigos to multinational Diageo for $1 billion dollars only four years after launch. Diageo was clearly paying for the brand cachet of Clooney rather than the liquor’s secret recipe.

The beverage company previously made a 50-50 profit split marketing the vodka brand Cîroc with Puff Daddy.

“No longer was it enough to vouch for a product; now we expect celebrities to have ownership stakes,” says Harris.

Ryan Reynolds, for example, bought a significant stake in a reputable Portland, Oregon, gin brand in 2018 and then starred in a series of commercials that drew on his Marvel character, Deadpool. Though the majority owned by Davos Brands, “Ryan Reynolds’s gin company,” as everyone now calls it, landed a $600-million-plus sale to Diageo in 2020.

Other stars are at it too with different products. For example, JustFab, which renamed itself TechStyle Fashion Group, has set out to use social media-based celebrity promotion to skip retail store and sell clothing directly to consumers. It teamed with Rihanna in 2018 to launch a lingerie range, subsequently gaining millions in VC funding and a current mooted IPO in the $3 billion range.

Harris also details one of the most successful attempts to parlay influencer fame into direct-to-consumer profit. This is known as the “ghost-kitchen” space, where entrepreneurs set up restaurants that function exclusively through delivery apps like Uber Eats and Grubhub, “avoiding costly real-world overhead.”

As Harris reports, the celebrity ghost kitchen is the brainchild of Virtual Dining Concepts (VDC), where MrBeast Burger is just one among a series of similar partnerships, including Mariah’s Cookies and Pardon My Cheesesteak. According to Harris, these are profit-sharing deals, and VDC makes sure to talk about participating celebs as partners rather than endorsers.

Read It on Amplify: Creator Marketing and Why It Matters

Once the celeb promoters have made their money, there’s nothing to keep them involved. Neither they nor the underwriting banks “have to convince anyone once the shares are out the door,” Harris notes.

In terms of bang for your buck, influencers have quickly become the gold standard for marketing products and creating fast wealth. It could be that the value of social media influence is now more important than capital expenditure on which to develop the product in the first place.

“In this situation, you want Mark Cuban to buy part of your company not so much because he can run it well or finance growth but because he’ll tell people about you. When it works, it’s certainly a quicker and easier path to success than a traditional business plan.”

And if being a company founder is about influencing the capital markets more than it’s about running a business, then it makes sense to get the most influential founder you can.

As the levels of promotional abstraction increase and the tie to actual products and services grows tenuous, a new question comes into play.

“If what people really want is the MrBeast wrapper, then why bother with the burger? Go for pure promoter’s profit. The big problem with selling nothing, however, is that someone else can always knock you off and beat you on the price.”

How do you get a monopoly on nothing? That was the question to which non-fungible tokens were, in Harris’ eyes, the answer.

“Digital instances of artificial scarcity, the only relationship NFTs have to generating operational revenue is that sometimes the promotional stories suggest there will be brand-licensing deals in the future. In practice, they’re nothing but promotion.”

In this space, cryptocurrencies also launched its own category of capitalist promoters whose fundamentally insubstantial projects managed to break through and attract serious money.

Sam Bankman-Fried of FTX is just the latest in the line of crypto cons according to Harris. Bakerman-Fried “conjured larger-than-life personas and alleged fortunes out of code.”

The art of advertising is to convince us to spend money on something we don’t need. Buyers beware.

Related Article
What Are the Investments Being Made in Influencer Marketing? 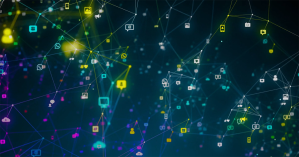 A new Influencer Marketing Impact Report finds that consumers are flocking to YouTube, while marketers gravitate to the more staid Facebook.