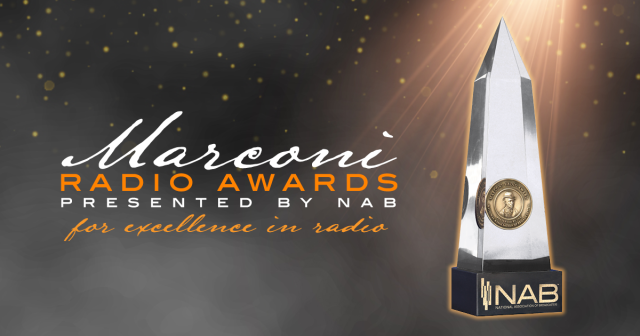 — Radio Show Will Integrate With NAB Show in the Future —

Washington, D.C. — The presentation of the 2021 NAB Marconi Radio Awards and the State of the Industry Address by National Association of Broadcasters (NAB) President and CEO Gordon Smith will take place virtually on November 10, 2021, at 2:00 p.m. EST at NAB.org/watch and will be available on-demand on NAB Amplify. NAB also announced plans to integrate the Radio Show into NAB Show on an ongoing basis beginning April 2022 in Las Vegas. This change provides more opportunities in one location for radio professionals and elevates radio in the larger media ecosystem represented at NAB Show.

The NAB Marconi Radio Awards honor radio stations and on-air personalities for excellence in broadcasting. NAB will name the winners in each of the 23 categories during the November event, which will be hosted by Angela Yee, co-host of the nationally syndicated morning show, “The Breakfast Club.”

Prior to the awards presentation, Smith will deliver his final State of the Industry address before stepping down as NAB president and CEO at the end of the year. Smith will reflect on his tenure leading the association and how the broadcast industry can continue to thrive into the future.

“It has been my great honor to represent America’s broadcasters in Washington D.C. and around the world for the past 12 years,” said Smith, who will assume an advisory and advocacy role beginning next year. “While I am disappointed we are not able to gather in person in Las Vegas, I look forward to connecting virtually and seeing everyone in-person at the 2022 NAB Show.”

NAB’s Marconi Radio Awards typically take place as part of the Radio Show. Beginning in April 2022, the Radio Show will be combined with NAB Show. The integrated event in Las Vegas will feature signature awards, networking events and a comprehensive conference program, including popular sales and marketing sessions presented by the Radio Advertising Bureau (RAB).

“It’s important that we continue to bring radio professionals together to network, celebrate audio and engage in meaningful discussions around the future of our industry,” said Erica Farber, president and CEO of the RAB.

From radio CEOs and general managers to sales managers, program directors and engineers, attendees will benefit from access to the NAB Show Floor with more than 160 radio and audio exhibits, Main Stage events and options for expanded registration packages that include the Broadcast Engineering and IT conference, workshops for creative professionals, special events and more.

“In today’s world where radio companies are essentially multimedia companies, the value in attending NAB Show cannot be overstated,” said David Santrella, president of Broadcast Media at Salem Media Group and NAB joint board chair. “We are now streaming and podcasting and even producing video. NAB Show provides unparalleled access to the critical tools, knowledge and connections we need to grow and thrive in today’s media business.”