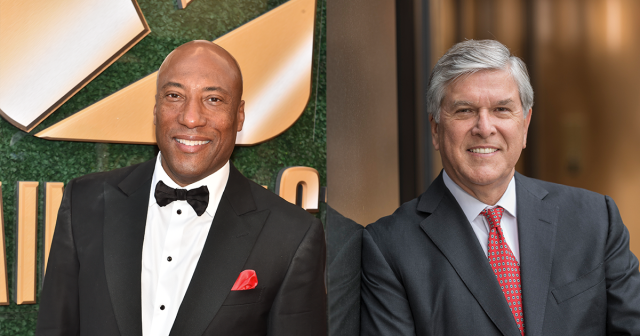 Washington, D.C. — Media entrepreneur Byron Allen and Gordon Smith, special advisor to the National Association of Broadcasters (NAB), will engage in a candid conversation about their unique careers and roles in the broadcast industry during a fireside chat on the Main Stage of NAB Show on April 27, 2022, at 9:15 a.m. in Las Vegas, Nev.

Allen, the founder, chairman and CEO of Allen Media Group / Entertainment Studios, which purchased THE WEATHER CHANNEL in 2018, and Smith, the former president and CEO of NAB, will discuss the steps in their professional careers that helped them achieve success during the NAB Show Executive Leadership Series session. Allen and Smith will also address their respective roles as advocates and leaders in the broadcast industry and the enduring value of local television in an ever-changing marketplace.

After starting his career as a comedian, Allen founded his media company in 1993, which now owns and operates 27 television stations in 21 markets, as well as 12 24-hour HD television networks and several streaming OTT/Mobile APPS including LocalNow. Allen also partnered with Sinclair Broadcast Group in 2019 to acquire 21 Regional Sports Networks (RSNs).

Smith was NAB’s president and CEO from November 2009 to the end of 2021, when he transitioned into a senior advisor role. He previously served two terms as U.S. senator representing Oregon. He will receive NAB’s highest honor, the Distinguished Service Award, at the 2022 NAB Show.

Together, these two industry leaders bring more than 90 years of broadcasting and media experience to this in-depth NAB Show Executive Leadership Series event. Their insights and opinions speak to every level of the broadcasting business, and will give valuable points of view and examples that NAB Show attendees can utilize as the marketplace grows and evolves in new directions.

Qualified members of the media may apply for press registration here.