The Dude abides: Jeff Bridges stars alongside John Lithgow and Amy Brenneman in “The Old Man,” based on the book by Thomas Perry and created for television by Jonathan Steinberg and Robert Levine. Cr: FX

The main interest in new FX drama series The Old Man is the old man playing the lead. It’s all the Jeff Bridges baggage from his youth in features from The Last Picture Show and his cult Dude for the Coens’ Big Lebowski to grizzled Hollywood veteran in Hell or High Water, combined with his brush with COVID and cancer, which seems to enrich the onscreen story.

The Old Man centers on Dan Chase (Bridges) who absconded from the CIA decades ago and has been living off the grid since. When an assassin arrives and tries to take Chase out, the old operative learns that to ensure his future he now must reconcile his past. John Lithgow and Amy Brenneman also star in the original created for television by Jonathan Steinberg and Robert Levine.

“What was interesting about this conceit is what happens when you were Jason Bourne 30 years ago,” Steinberg tells Brandon Katz at The Wrap.

“It’s a story that is really about these guys confronting their mortality, especially in the case of Dan Chase. He’s a person who has dodged mortality and felt immune to it in some respect to get through all of the things he’s gotten through and now it’s about what happens when you can’t dodge it anymore and your body is failing you and you’re living alone and your children are grown.”

READ MORE: ‘The Old Man’ EPs Explain Jeff Bridges Thriller: ‘What Happens When You Were Jason Bourne 30 Years Ago’ (The Wrap)

Littlefield and Steinberg presented the 72-year-old Bridges with an undeniably appealing pitch, as they recounted to Margy Rochlin at Emmy magazine. The duo saw expanding author Thomas Perry’s novel into a series as a chance to riff on the themes Clint Eastwood pondered in The Unforgiven, his 1992 Western about a gang of aging outlaws.

“Stylistically, they envisioned something akin to ‘70s nailbiters like Francis Ford Coppola’s The Conversation and Alan J. Pakula’s The Parallax View,” she writes. Framed in this manner, The Old Man begged for an actor of Bridges’ stature. “You don’t make Unforgiven with an unknown,” Steinberg reasoned. “It immediately felt like a movie-star role.”

Adding to Bridges’ iconic status as a fan-favorite is his Lazarus-like comeback from the double whammy of dual disease.

As Rochlin details, the original plan was to shoot the first half of the series on location in LA, then move the production to Morocco to shoot the rest of the episodes. But in March 2020 — four days before leaving for northern Africa, where a unit had already been dispatched and sets were being built — production was forced to shut down due to the pandemic.

Seven months later, just as filming was about to resume, Bridges announced he had been diagnosed with lymphoma and wouldn’t be returning until he completed chemotherapy.

READ MORE: Jeff Bridges Back from the Brink (Emmy magazine)

After receiving chemotherapy, the actor contracted COVID-19 and spent nearly six weeks in the hospital. “I surrendered to the idea that I might die — that it might be the end of the race,” Bridges said at the show’s premiere, according to The Hollywood Reporter’s Chris Gardner. “That’s what’s going to happen to all of us at some point, and maybe this was my time to go through that.”

The show’s premise mines a profitable genre in recent years. Sylvester Stallone, Bruce Willis, Liam Neeson and Bob Odenkirk have all played characters retired from the fray and brought reluctantly back to action (with all their spycraft and martial arts chops intact).

“[The show] offers the reliable entertainment value of seeing a silver-haired professional bring his deadly skills to bear against younger opponents,” Make Hale, television critic for The New York Times, finds. The seriousness of the show’s approach to Chase, and Bridges’ excellence in the role, are what set The Old Man apart, but it’s also a well-above-average if unusually pensive and introspective spy thriller.

READ MORE: ‘The Old Man’ Review: Jeff Bridges Comes to TV and Goes on the Run (The New York Times)

Chase Hutchinson, senior feature writer at Collider, thinks the closest reference point of what the series feels like it is going for is the 2010 George Clooney film The American, a work that was essentially an arthouse take on the spy film.

“This show is often as conflicted as its central figure, grasping at being more character-driven while also dipping into expected action fare. It does this with recurrent fight sequences that, while competently directed and staged, are nowhere near as interesting as the more deliberate moments built around the gravitas of Bridges.”

READ MORE: ‘The Old Man’ Stands Out From Other Action Fare by Embracing Vulnerability (Collider)

Rolling Stone TV critic Alan Sepinwall agrees. “Even if FX had opted to change the title from to maybe The Dude Abides Murder —The Old Man would still feel somewhat generic,” he writes.

“The story feels like an afterthought, and the energy level tends to droop whenever Bridges is not getting his homicide on.”

Want more? Learn more about how the story went from novel to script to screen in this interview from FX Networks with The Old Man series creators and star Jeff Bridges:

Jeff Bridges and John Lithgow reveal what it was like playing opposite a stacked cast in this inside look at the series from FX Networks:

Or, watch Jeff Bridges and the stunt crew of The Old Man dive deep on the process of crafting those harrowing action scenes:

Finally, watch this Q&A from the Television Academy with Jeff Bridges as he talks about the new FX thriller. After taking a long break in filming due to the COVID shutdown and his treat for lymphoma, he shares how it was good to be back on set:

“The Old Man” Takes Its Place Among the Classics

Stemming back to ancient Greece, when Homer first recited The Odyssey aloud, the classic trope of a war-hardened man returning home has continued to resonate with audiences. Centuries later, director Francis Ford Coppola created another classic in the same vein with Apocalypse Now, his adaptation of Joseph Conrad’s chilling novella, Heart of Darkness.

For Collider’s Nathan Maizels, FX series The Old Man, created by Jonathan Steinberg, is right up there with these iconic works.

Forced into hiding, Dan Chase (Jeff Bridges) is estranged from his wife and daughter and living off grid after making enemies during the Soviet-Afghan war. “His situation is akin to being stranded, much like the hero Odysseus from The Odyssey on Calypso’s island,” Maizels recounts. “Both stories open with a character that found returning from war was a difficult, if not impossible, task.”

Although the heroes of both stories face very different challenges, Maizels points out that the parallels between them become even more evident as the series progresses. “With The Old Man, we get to see an epic unfold before our eyes and see Chase’s return home from Afghanistan through flashbacks.”

Maizels also cites the relationship between Alcinous and Odysseus, comparing it to that of Chase and Zoe McDonald (Amy Brenneman). “Chase’s stop-over with Zoe McDonald is close in form to Odysseus’ stop with the Phoenicians. Initially, Chase hides his true identity from Zoe, and she takes to him and offers help. When she eventually learns his true identity, like Alcinous to Odysseus, she still wants to help him.”

Chase’s daughter Emily (Alia Shawkat), is another example. Her secret identity as FBI agent Angela Adams, tasked with hunting Chase down, places her in the same position as Odysseus’ son, who must thwart the suitors that have taken over his home in his father’s absence.

Apocalypse Now is another Odyssean journey, Maizels contends. Captain Willard (Martin Sheen) struggles with flashbacks and hallucinations in the opening sequence. Chase experiences a similar start: “The Old Man opens with scenes of Chase struggling to sleep, grappling with hallucinatory visions of his dead wife,” Maizels explains. “Both scenes evoke a lost feeling. Both Willard and Chase know that they are not where they want to be in life, but neither knows if returning from war is even possible.”

But Chase might actually be more of a stand-in for Colonel Kurtz (Marlon Brando) than Captain Willard, says Maizels. “It is almost an alternate ending where Kurtz survives well into adulthood with Willard, his assassin, lurking behind closed doors,” he observes. “In this way, FBI Agent Harold Harper (John Lithgow), who was the Chief of Station during the war and is currently tasked with hunting down Chase, serves as a Captain Willard-type character.”

Maizels writes that Steinberg has created a series that stands out in its genre. “The way The Old Man delves into the depths of the incitement to journey and the universal aching for home sets it apart from other entries in the retired-veteran-that-still-kicks-butt genre.”

READ MORE: How ‘The Old Man’ Evokes the Classics With a War Veteran’s Journey Home (Collider) 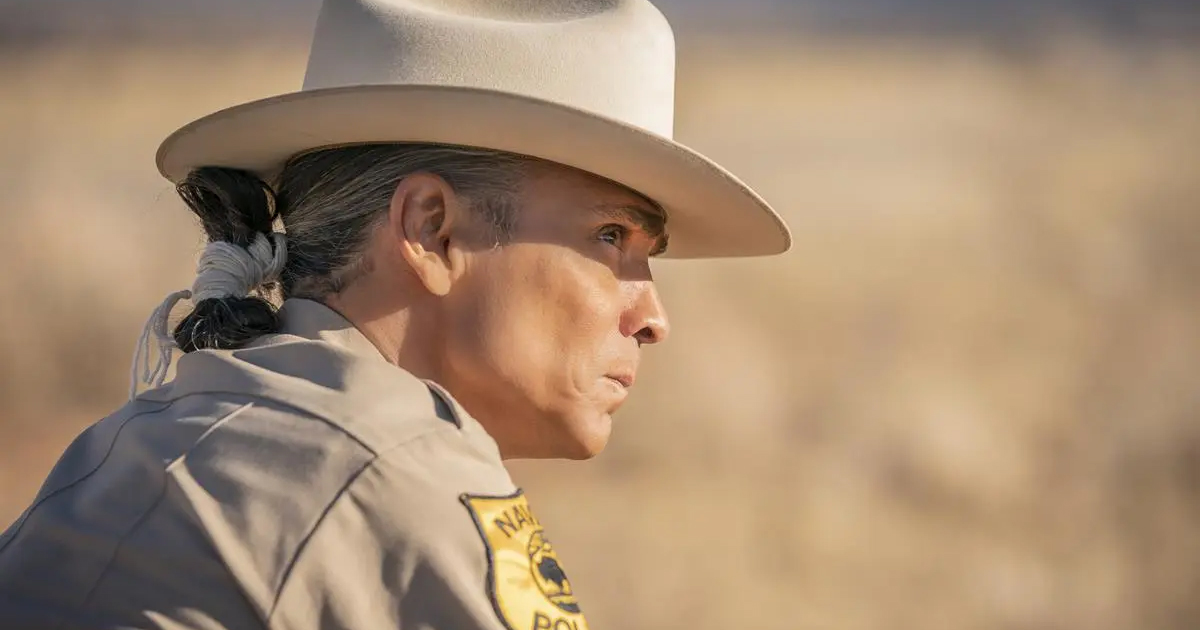