HBO’s brutal new crime drama We Own This City takes a look at the rise and fall of Baltimore’s Gun Trace Task Force, or the GTTF, through surprisingly intimate portrayals of the real people caught in the center of the scandal. The series is based on former Baltimore Sun reporter Justin Fenton’s non-fiction book of the same name and has been produced by two of the crime genre’s all-time greats: George Pelecanos and David Simon.

The duo previously tackled the twin monsters of crime and police corruption in the HBO masterpiece, The Wire, and worked together on HBO shows Treme and The Deuce.

While The Wire was a sweeping opera showing the interconnection between law enforcement, the drug trade, ports, politics, and journalism, We Own This City — also shot in Baltimore — looks at a very specific group of corrupt cops.

“It’s a devastating six episode limited series that will leave you feeling raw, even if it ends with a whole bunch of bad guys behind bars,” Decider’s Meghan O’Keefe writes in her interview with the showrunners.

“The truth is that law enforcement runs the spectrum. So does the street for that matter,” Simon said. “Everyone starts on the human scale somewhere.”

In 2017, eight Baltimore Police Officers who worked in the Gun Trace Task Force were found guilty of using their positions to shakedown civilians for cash, falsifying police records, and scamming their way to outsized overtime paychecks.

Fenton, who worked as a consultant on the show, says the level of corruption was absolutely staggering. “It spans dozens if not hundreds of incidents under our noses,” he told David Smith in an interview for The Guardian.

“There’s been so much rightful attention on police brutality and so we know when an officer shoots somebody there’s an injury, there’s a death. But this type of casual everyday lying, stealing, misrepresenting information, in some cases framing people — it’s hard to prove and for that reason it often went unaddressed.”

We Own This City looks at these crimes, primarily through the story of the group’s ringleader, Sgt Wayne Jenkins (played by Jon Bernthal). He was praised as a positive role model who enjoyed the admiration and respect of his superiors. He was given special privileges; the elite unit came to be seen by senior commanders as “a bulwark against chaos.” Jenkins is now serving a prison sentence until January 2039.

Simon explained to Decider that they seized upon Jenkins as their primary character because he had the “longest chronology” to cover.

The story of Jenkins, his colleagues and accomplices, and the scandal surrounding them is a complex one. “The level of detail is intentional,” Pelecanos said to Josiah Bates in an interview for TIME. “If we have any fears about doing these shows, it’s that a person in Baltimore will look at our Baltimore show and say, That was bullsh-t. Same thing when we did The Deuce in New York. If one person knows we didn’t get it right, it bothers me.”

At times, We Own This City feels more like a documentary than a TV drama.

“You have to deny yourself the perfect drama sometimes,” Simon told Bates. “Sometimes you have to say, that this would be the grander arc if we could portray it this way, [or] it the guy had a more poetic line. And sometimes you have to kill those, because they deny the reality that you are responsible if you’re dealing with nonfiction material.”

Some might say this is a peak moment for based-on-truth TV dramas, but Pelecanos says their take is different.

“People like to see rich and successful people get taken down. That’s why a show like Law & Order is so popular. It’s always the person who lives on Central Park West that did a murder. It’s a false narrative; it makes people feel like yeah, there is justice. The truth is those people don’t go to jail. I think shows that highlight the realities stand out more.”

But they’re not just interested in facts — they want to convey the feeling of committing these crimes, suggests Jason Bailey at The Playlist.

“The seductiveness, the ease, and most of all, the entitlement,” he writes. “Jenkins has a short but punchy speech where he explains exactly why he feels he should help himself, and while the view is certainly not endorsed, the writers at least attempt to understand it.”

“We don’t believe ‘back the blue’ or the ‘thin blue line’ is the motif that you need to take into a serious discussion about law enforcement,” Simon told TIME. “But we also don’t believe that ‘defund the police’ works as a simple mantra that solves anything. We live in the middle. There’s a role and a mission for good police work that’s not happening in Baltimore, which is the most dangerous it’s been in modern history. If you live for a slogan and that’s where you reside in your assessments of what’s going on in America, you will be disappointed in the arguments that we’re trying to present.”

READ MORE: David Simon and George Pelecanos on How America Changed Between The Wire and Their New Police Show We Own This City (TIME)

This is not The Wire returns, but the issues explored in that show’s six seasons are continued here. In many cases the corruption and complexity has multiplied.

“About 40, 50 years ago, we started emphasizing the wrong things and judging police work by the wrong metrics. Baltimore and the Gun Trace Task Force is the coda,” Simon told Decider. “We started arguing these things in The Wire, but things have reached a pass and ultimately some of the characters we depicted in The Wire were already off the rails, but they weren’t dragging the whole department with them — you know, the Hersls and Carvers of The Wire — they’re now the Colonels and the Majors. And they’re now training the lieutenants in the story in how not to do police work the right way.

“So, the institutional memory of a lot of these agencies has now become lock everybody up, put dope and guns on the table and turn the other way when things get dirty instead of doing actual police,” Simon said. “That’s what happened in Baltimore.”

One thing that happened since The Wire is smartphones. “The technology really made a difference,” Pelecanos said in TIME. “Everybody can record what’s going on in the streets, and people can’t lie as easily because it’s on record. [The officer who killed George Floyd] never would have been convicted without the footage from the iPhone.”

We Own This City’s plot hops back and forth in time so we can see the cause and effect of the GTTF’s crimes. Pelecanos and Simon admitted to Decider they were worried about this risky way of plotting the series, but Simon said, “If we went linearly, it becomes just a story of here are these bad cops and we’re going to catch them. We really wanted it to be about the why. Why did this situation come to the place it did? How did these people come about?”

READ MORE: David Simon and George Pelecanos Call ‘We Own This City’ a “Coda” for ‘The Wire’ (Decider)

It hasn’t entirely worked. “The show’s biggest flaw, one of the few it shares with other true-crime dramas, is a fractured chronology that emphasizes cleverness over comprehension,” Joshua Alston critiques at Variety.

“With this much happening at once, all the onscreen datelines in the world aren’t enough to avert the sense of being unmoored from time. But that may be a quibble for a show like City, which is inspired by a type of true crime so pervasive and deep-rooted that only the tools and tactics evolve over time.”

READ MORE: ‘We Own This City’ Is the Perfect Marriage of Material and Its Co-Creators, David Simon and George Pelecanos: TV Review (Variety)

All of the episodes are directed by Reinaldo Marcus Green (King Richard), “who does his best to keep the complicated chronology straight,” according to Playlist. “He mostly succeeds, though this is not casual viewing, and viewers who use TV as background while scrolling or doing chores will likely be lost.

READ MORE: ‘We Own This City’ Review: David Simon’s Latest is Another Electrifying Story of Police & Politics (The Playlist) 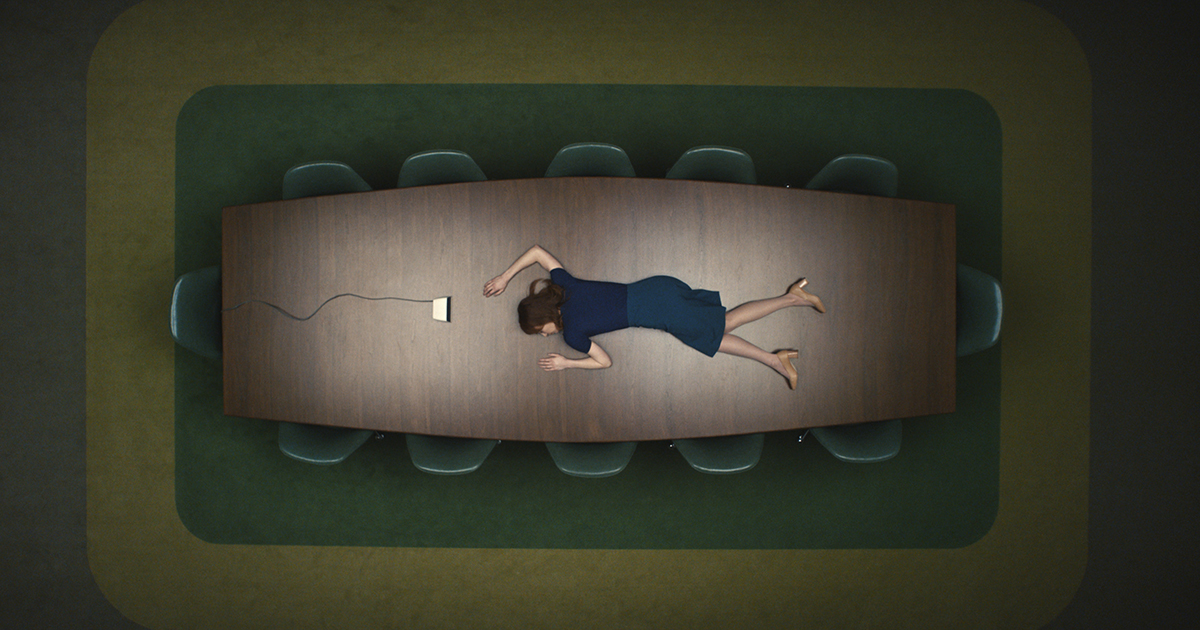 Building the Insane (But Strangely Familiar) World of “Severance”