Showrunners Jantje Friese and Baran bo Odar consider themselves “old school filmmakers,” but as they told Deadline, the timing of the COVID-19 pandemic and ensuing travel bans meant that the pan-European shoots they’d intended were off the table.

Fortunately, the “Dark” creators had inked a deal with Netflix (and additional funding from the Investment Bank of Brandenburg) that meant they could put the necessary resources into creating a production studio custom-built for their ambitious, sea-set project.

Netflix did much more than dip its toes in VP with “1899;” the company signaled strong belief in the tech’s potential and in its globalization efforts.

The move was consistent with other investments; in 2018, the streamer hired Girish Balakrishnan to serve as its director of virtual production. Nonetheless, it was VP of Global Franchises Kelly Luegenbiehl who first floated virtual production as a possibility to “1899’s” showrunners, Deadline reported. Friese and bo Odar visited Netflix’s Shepperton Studios volume to get a sense of the tech’s applications before committing.

“I envision that Germany can become a European leader in virtual production” through the Dark Bay facility, Netflix Director of International Originals Rachel Eggebeen told Deadline’s Tom Grater in 2021. Since “1899” wrapped production, Dark Bay has been utilized for at least one additional project.

The ARRI team outfitted the studio with 55-meter-long and seven-meter-high LED wall, curved at 270°, as well as 70 ARRI SkyPanels, which illuminate the volume.

Framestore’s Jack Banks told Tech Crunch that these panels had to be hi-res and water-resistant (“1899” is set on the water…) — all while managing computing power requirements.

The project was also equipped with ARRI’s Alexa Mini LF camera and rental lenses designed for the project; the company tweaked its large-format anamorphic Alfa lenses to adjust the bokeh to allow movement inside the volume (more on that later), Dark Ways MD Philipp Klausing told Adrian Pennington in an interview for IBC.

“Everybody is focused on content on the wall and think that this is virtual production, but it is not,”  Klausing clarified. “VP is about the composition of the foreground and the actors and giving them a true-to-reality environment to play in. We want to record them, not the background.”

The Scenes Set the Scenery

“The story was the driving input in setting up the stage,” Klaussing explained to Tech Crunch’s Devin Coldewey. “We have a show set on the ocean, on a steamship that doesn’t exist in the world, and we knew with corona we couldn’t really do the show classically.”

It seems that the influence runs in two directions. Friese told Deadline that virtual production “makes you write scenes differently, it allows you to explore things you might not be able to explore on a natural set.”

Referring to its creative potential, Coldewey compared virtual production to “a box of toys that creators have only just begun to unpack.”

While virtual production techniques solved many of “1899’s” filming challenges, it also introduced unique strictures. Specifically, the physical walls of the volume itself meant that certain shots were initially impractical or even impossible, and stage access was limited by the scale of the walls.

The showrunners devised an ingenious yet practical solution: a rotating LED wall and a new “pizza slice” shooting technique.

However, the showrunners devised an ingenious yet practical solution: a rotating LED wall and a new “pizza slice” shooting technique. Balakrishnan explained that the teams still had to contend with swapping out elements of the physical set, even if they could change the LED scene with the touch of a button. That’s where the turntable came in (and 180-degree views reentered the chat).

Production Designer Udo Kramer and Construction Manager Andreas Vieweg were charged with, essentially, inventing the rotating volume (and dressing the various sets featured in it).

Balakrishnan explained, “The unique benefit of the revolving stage is… you can have multiple physical and digital sets on the stage within a single shooting day, and rotate as needed to shoot multiple angles and coverage.”

In addition to the movement of the turntable: on “1899” the ship is “constantly moving, the camera is too. I think 95 percent of the shots are handheld to make it feel alive and wild,” bo Odar explained in an interview with The Hollywood Reporter’s Scott Roxborough.

And keep in mind that the LED walls themselves aren’t traditionally two-dimensional. The content captured on site was scanned and transformed by Unreal Engine “into 3D models  so you can actually walk through them. If I push the camera towards the wall, the landscape moves with us,” bo Odar noted in his Deadline interview. “It’s about creating 3D worlds in camera that can move and change with you.”

But in order to make that happen, bo Odar explained, “Everything has to be decided beforehand, you have to create it, build it, so it’s all ready to shoot in camera.”

Additionally, bo Odar told The Hollywood Reporter, “You have to think in layers and how you combine those layers. Usually, the foreground is the actor and then the background is what you have on the LED volume screen. But the mid-ground, the thing in between, that’s what actually glues these two layers together, and it’s the most important part of the whole process.”

It’s not yet clear if all the buzz around the making of the series will bear out into the popularity Netflix prizes. Per Dan Einav’s Financial Times review: “[T]here’s enough intrigue fueling this ship to keep us going along with it. It’s just hard to tell if we’re heading anywhere truly interesting.”

Related Article
“1899” and How Netflix Is Viewing Virtual Production 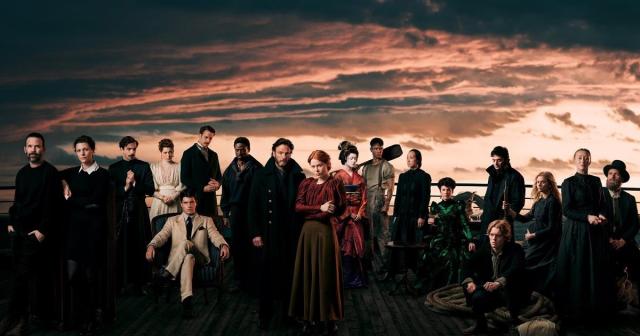 “1899” is revealed to be the first production at Netflix’s Dark Bay, a new Volume stage built at Studio Babelsberg in Berlin.