Netflix is continuing to push the boundaries of storytelling with a new non-linear heist series, Kaleidoscope. Stretching across eight episodes, the anthology series spans 25 years, following a crew of masterful thieves and their attempt to crack a seemingly unbreakable vault for the biggest payday in history. Guarded by the world’s most powerful corporate security team, and with law enforcement on the case, every episode reveals a piece of an elaborate puzzle of corruption, greed, vengeance, scheming, loyalties and betrayals. How did the crew of thieves plan it? Who gets away with it? Who can be trusted?

“Netflix has never been shy about putting experimental TV on its platform, as seen with interactive specials like Bandersnatch,” Wilson Chapman notes at IndieWire. “Now, the streamer is playing with the medium’s episodic format with Kaleidoscope, a new anthology series set to premiere New Year’s Day.”

Kaleidoscope (formerly known as Jigsaw) is loosely inspired by the real-life story where $70 billion in bonds went missing in downtown Manhattan during Hurricane Sandy.

The compelling crime anthology series takes a non-linear approach to storytelling, building intrigue and suspense across seven standalone episodes — color-coded “Yellow,” “Green,” “Blue,” “Violet,” “Orange,” “Red” and “Pink” — leading up to the epic “White: The Heist” story finale. The series offers different immersive viewing experiences depending upon the order in which the episodes are seen.

“The format is also a good way to put a twist on a story we’ve seen a million times; bank heist movies and series frequently follow a set of tropes that include recruiting members, mapping out the heist in extreme detail, and people double-crossing each other,” Erick Massoto writes at Collider. “This was the theme of one of Netflix’s most popular series: Spanish-language thriller Money Heist, which has spawned a spin-off and a Korean remake. In Kaleidoscope, the difference is that the bank robbery takes place during a storm, and its non-linear format is certainly what will set the series apart.”

All viewers will eventually see all eight episodes, but the order in which they watch the episodes will affect their viewpoint on the story, the characters, and the questions and answers at the heart of the heist.

How will you experience the colors of Kaleidoscope?

Related Article
“Kimi:” It’s Not Tech Paranoia If They’re Legit Out to Get You 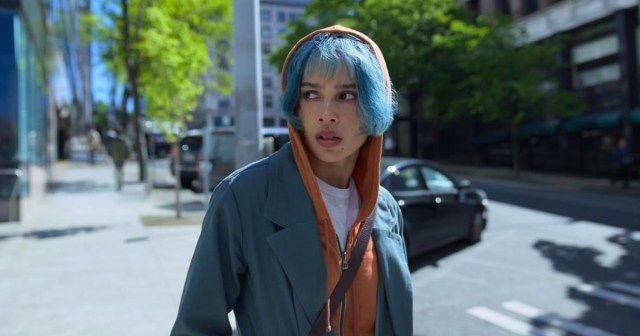 Steven Soderbergh’s “bottle film” is a surveillance thriller for an age when everyone knows they’re constantly being spied upon.