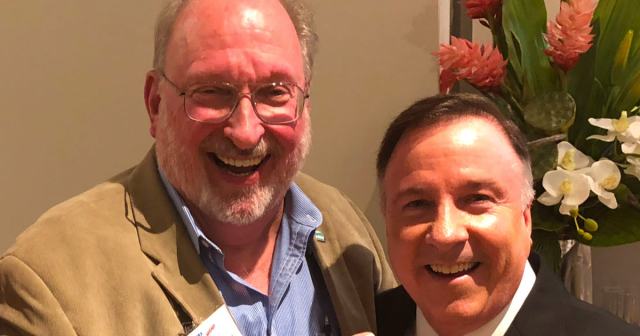 “The Jim Bohannon Show” airs from 10:00 p.m. to 1:00 a.m. (ET) Monday through Friday on over 300 radio stations. Delivering his wit, wisdom and natural charm to listeners across the nation, Bohannon offers a unique blend of breaking news, informative reports on a wide range of topics and live conversations with listeners.

A 50-year-plus broadcasting veteran, Bohannon spent over 31 years as host of the early morning weekday news magazine, “America in the Morning,” for which he still provides interviews and his feature “The Offbeat.” He previously hosted the weekend news magazine “America This Week.”

“Jim encompasses the spirit of radio. His distinct voice, humor and engaging programs have informed and entertained listeners for 50 years, while addressing historic milestones affecting our nation,” said NAB President and CEO Gordon Smith. “I am grateful for his friendship and the opportunities I have had to be a guest on his show. We congratulate Jim on this befitting honor.”

Bohannon began his radio career in 1960 at KLWT-AM in his hometown of Lebanon, Missouri. Following college and military service during the Vietnam War, he returned to radio in the Washington, D.C. market, covering news at both WTOP-AM and WWRC-AM. He later worked as a morning anchor at WCFL-FM in Chicago and as a freelance reporter for CNN.

Bohannon hosted his own Saturday night phone-in program starting in 1984 and served as the principal back-up for Larry King on the “Larry King Show.” In February of 1993, Bohannon took over the prestigious nighttime radio talk show slot formerly held by King.

Bohannon joined Westwood One in 1983 and has anchored newscasts, political conventions and election night coverage in addition to his weekday programs.

Bohannon is a recipient of a Special Recognition First Amendment Award from the Radio Television Digital News Association and was named by TALKERS magazine editorial board as the 2013 recipient of the publication’s prestigious Lifetime Achievement Award. He was inducted into the National Radio Hall of Fame in 2003, and into the Missouri Broadcasters Association Hall of Fame in 2020.

The NAB Broadcasting Hall of Fame recognizes radio and television personalities or programs that have earned a place in broadcasting history. Explore the complete list of past inductees here.

Qualified members of the media may apply for NAB Show press registration here.