We don’t know Jeff Bezos, but we know he’s a very competitive man. Why else would he launch his space tourist company Blue Origin against Virgin Galactic? Or his low-orbit satellite internet service Project Kuiper against Elon Musk’s Starlink?

But now he’s taking his competitive streak to global television screens with the new fantasy TV series, The Wheel of Time. As Brad Stone reports in his recent book, Amazon Unbound, Bezos had a clear idea of what he wanted. In fact, Bezos told his executive team, “he wanted his Game of Thrones.”

But, as Alison Herman writes in The Ringer, “The goal was, on one level, almost redundant; isn’t ‘the next Game of Thrones’ just another term for ‘the next TV megahit,’ and isn’t the objective of every TV show for as many people to watch it as possible?”

But the “sorta-pivot” also makes a certain sense, Herman argues. “It wouldn’t be consistent for the Everything Store to specialize in lower-budget series with the look and feel of an independent film — though over the years, Amazon has acquired plenty of those, too. (Annette, the recently released French rock opera with a singing puppet baby, was one of theirs.) As a company, Amazon is nothing if not vast in scale. Perhaps their productions should be, too.”

READ MORE: The Search for the Next ‘Game of Thrones’ Rolls on in a ‘Wheel of Time’ (The Ringer)

GQ Magazine’s Zach Brown sees this particular space race for content as one to reproduce the massive, decade-long success HBO had with Game of Thrones. “In this competition for content and eyeballs, Amazon and Apple have an advantage over their competitors in that they are the two richest brands in the world — so rich that they can afford to follow the whims of their founders, wherever those whims may go,” he notes.

“Money, by the standards of any other studio in the history of television, was no issue. Amazon just had to find the right project. In the end it settled on two, buying a pitch from a relatively untested television writer, in Rafe Judkins, who had grown up reading The Wheel of Time and had an idea about how it might work as a series.

“Amazon also spent a reported $250 million on the rights to The Lord of the Rings and, in time, put both into production,” Brown writes.

READ MORE: Inside Wheel of Time, Amazon’s Huge Gamble on the Next Game of Thrones (GQ Magazine)

As for the TV series, which arrived on Amazon Prime Video on November 19 and was greenlit for a second season ahead of the series premiere, the ingredients are all there for a Game of Thrones-like TV feast. The Wheel of Time is one of the most popular and enduring fantasy series of all time, with more than 90 million books sold.

Set in a sprawling, epic world where magic exists and only certain women are allowed to access it, the story follows Moiraine (Rosamund Pike), a member of the incredibly powerful all-female organization called the Aes Sedai, as she arrives in the small town of Two Rivers. There, she embarks on a dangerous, world-spanning journey with five young men and women, one of whom is prophesied to be the Dragon Reborn who will either save or destroy humanity.

Judkins discussed the comparisons between the two fantasy series in an interview with Polygon’s Preeti Chhibber.

“Wheel of Time in the literary world really sits as kind of the pillar between Lord of the Rings and Game of Thrones,” the showrunner said.

“But [the show is] coming out after both of them. So, we have to be mindful of that I think, too,” he acknowledged. “There are things that Wheel of Time created that Game of Thrones did their riff on, and it’ll feel like we’re being repetitive when it was actually in Wheel of Time first… I try to be really true to what the Wheel of Time books are, and what makes them great.”

READ MORE: The Wheel of Time’s showrunner is ready to adapt the unadaptable (Polygon)

Little Black Book’s Laura Swinton takes a look at the marketing campaign for the series, which she says interweaves “inventive activations, collaborative fandom strategies and a dash of the One Power.

“Given the reported $10 million per episode production budget, Amazon wants to make sure that this series pays back — that it is seen and drives Amazon Prime subscriptions,” she writes. And to do just that, “The first step has been to engage the existing fandom — in fact the fandom has been acknowledged even in the making of the show.”

READ MORE: How Amazon Is Marketing The Wheel of Time to Fans and Fantasy Novices Alike (Little Black Book)

In service to that fandom, Judkins and Pike took time to answer questions about the production process and what to expect in the adaptation in a Q&A on Twitter:

NBC’s Ani Bundel believes the story is a step in the right direction for the fantasy genre. Calling it the “ultimate unfilmable fantasy saga,” this 14-book series “usher[ed] in an era of doorstopper-sized, continent-spanning fantasy epics revolving around ‘chosen one’ narratives.”

“The series was a marvel of meticulously detailed world-building. However, it cared little for momentum,” Bundel said. “Rather than move the story forward, Jordan preferred to devote chapters upon chapters to building out subcultures and customs while reveling in taking the mythos of the Eastern and Western traditions and melding them into a single hero’s tale.”

READ MORE: Amazon’s ‘The Wheel of Time’ looks to push fantasy beyond ‘Game of Thrones’ (NBC)

At TechRadar, Tom Power says this conversion from book to screen for this series will become your new “fantasy show obsession.” Even though the book series is dense, “Amazon’s adaptation has streamlined the novels’ labyrinthine story and worldbuilding as much as possible,” he says.

“From the opening minute of the series’ premiere, we’re treated to a summary of events, courtesy of Pike’s Moirane, that precede The Wheel of Time’s overarching plot. It’s only brief, but it instantly sets the scene for what’s currently at stake in the Randlands, and means that audiences don’t have to sit through a lengthy preamble about its past.”

For the production, The Wheel of Time needed space, and lots of it. Unfortunately, production hubs across the world were full, but eventually they landed in Prague, where Jordan Studios is built, just outside the city and named after the author Robert Jordan.

Fansided’s Dan Selcke describes the colossal undertaking that is and was Jordan Studios. “We’re talking a private stunt gym, a costume department, writers’ offices, accounting operations, a visual effects studio, multiple enormous sound stages all in this building that is 350,000 square-feet.”

Costume designer Isis Mussenden created 350 costumes for the first two episodes alone. “I’ve personally been to Madrid, London, and New Delhi to buy textiles,” she said, “because we have so little here and we need thousands and thousands of meters of fabric to create all of this.”

Then, Selcke notes, there are creatures, including “fearsome beast soldiers” called Trollocs. “You’re sort of saying, ‘Okay, you can’t have any influences or imagery tying into orcs and Lord of the Rings,’ ” said creature designer Nick Dudman. Trollocs are supposed to be tall, “but I didn’t want to put them on stilts because of the fact that we’re running through woodland, and running downhill on stilts is just really not a good idea.”

READ MORE: The Wheel of Time showrunner got advice from Game of Thrones creators (Fansided)

But how do you find out what the secret sauce was that made Game of Thrones such a colossus in the TV ratings war? You could ask the show’s showrunners, and that’s exactly what Judkins did. “Judkins sought out advice from Game of Thrones showrunners David Benioff and Dan Weiss. ‘Just do what you’re going to do,’ they told him. ‘You know what this is. You have to believe in it. These kinds of things have to have an extraordinary clarity of vision to work.’ “

But pre-launch, the talk is still all about the money. Viewers have become accustomed to a kind of scale, or realism, that creeps toward the real. “It’s not like we can go say, ‘Oh, you know, Game of Thrones, season one, they only spent this,’ ” commented Mike Weber, an executive producer of The Wheel of Time. “The audience expectation is coming off of the last season of Game of Thrones, not the first season.”

For the first season of Game of Thrones, HBO spent about $6 million an episode, a number that steadily climbed from there. Amazon and The Wheel of Time? They’re starting at upward of a reported $10 million per episode — for eight total, the first of which will begin streaming in November — just to get out of the gate. 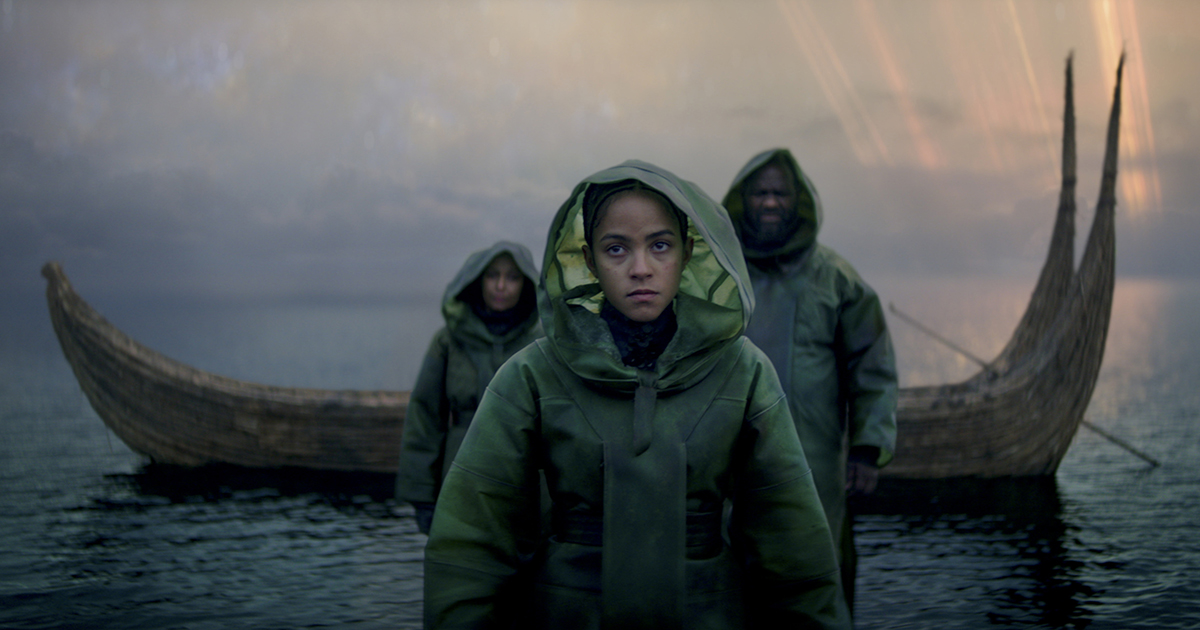 The World-Building VFX of “Foundation”

In an interview for The Hollywood Reporter, Pete Keeley asked Judkins about one set piece that’s different between the novel and the series — the changing perspectives within the Trollocs’ attack on Emond’s Field. “Outside of the first book, one of the hallmarks of the series was that you track all of these characters’ POVs. So that was one thing we really felt like we needed to put in the pilot, was much more of an ensemble feeling,” he said.

“So in the books, you only know what happened to one character on Winter Night, but in the show we are seeing what might have happened to each of these characters during that battle, which, it’s not creating something that wasn’t there. It happened. They had these experiences. We just didn’t get to see what they were [in the book] because we were focused on [Rand].”

Amazon Prime Video also released a 360-degree experience for the official trailer to The Wheel of Time, which allows viewers to click and move the trailer in order to watch and hear at all angles. Check it out in the video player below, and possibly find some hidden gems within the various energy waves: