In Nikyatu Jusu’s debut feature Nanny, the horror is systemic. Crossing genres, the psychological horror movie is a social critique and a tale of displacement, following Aisha (Anna Diop), a woman who recently emigrated from Senegal and is hired to care for the daughter of an affluent couple, Amy and Adam (played by Michelle Monaghan and Morgan Spector), living in New York City. In a story that has become all-too familiar in reality, Aisha is also a mother haunted by the absence of the young son she left behind. She’s seeking her own version of the American Dream, one in which she earns enough money at her new job to bring her son to the US, but Aisha becomes increasingly unsettled by the volatility of her employers as well as a violent presence that invades both her dreams and waking life.

The first horror film to win the award, Nanny won this year’s Grand Jury Prize at Sundance, with Jusu becoming the second Black woman director to be recognized. The writer-director’s short vampire film, Suicide by Sunlight, also debuted at Sundance in 2019.

“Nanny offers plenty of examples of those who don’t survive, and you could call it a highly aestheticized yet painfully close-up portrayal of what someone might need to endure, to feint and dodge her way through, in order to have a shot at doing so,” Lidija Haas writes in her review for The New Republic. “For most of the film, we don’t know whether Aisha may harm or even kill the small, blond child — stakes older than the movies themselves — and one of the most tense aspects of not knowing is our keenly calibrated sense of what it will cost Aisha if she does.”

READ MORE: Who’s Afraid of the Nanny? (The New Republic)

“While recent films in the Black horror genre have presented the terrifying realities of being Black in America, Nanny is rooted in the specific experience of the African diaspora,” Pilar Galvan notes in her review for NPR. “Black horror films often subvert systems of oppression but they also often employ Western devices and narratives. In films like Master, Get Out and Candyman, the horror device is the predominantly white institution or neighborhood — which has implications on the Black character’s sense of self and being. In Nanny, the white domestic space is the setting, but the tensions are manifested through African folklore.”

Nanny was shot on the Sony VENICE by director of photography Rina Yang, BSC, the first Asian woman to be accepted into the British Society of Cinematographers, and also the first female DP to win a cinematography award at the British Arrows. In addition to shooting episodes of HBO’s Euphoria and Top Boy for Netflix, Yang also shot the BAFTA-winning Sitting in Limbo for the BBC and Taylor Swift’s VMA-winning music video, “All Too Well.”

“There are many components that contribute to creating Nanny’s tone and texture,” Yang comments in the film’s production notes. “I lit the film’s two worlds with a stylistic dichotomy in mind, with Amy’s world lit by LEDs and other modern sources to imbue its clinical and linear feel, while the camera language is more composed and static. Aisha’s world was shot more handheld and intimate, lit mostly by tungstens and some fluorescents to make it feel warm, cozy, and comfortable.”

“We wanted to subtly heighten the visuals when Aisha is in Amy’s world,” Yang explained to Weinstein. “Ultra Panatars are only x1.3 anamorphic, so that’s a very subtle effect. The focus fall-off and the flare felt like the right choice for that world. And I wanted Aisha’s everyday life to have a more grounded and spontaneous feel, which was brought out by the H-series and a more handheld approach.”

Aisha’s nightmares are haunted by visions of the Mami Wata, a malevolent mermaid from African folklore. In one nightmare sequence, Aisha hears the creature’s cries coming from outside the guest room door and looks up in terror as a deluge of water pours down from the ceiling and the room begins to flood.

Yang’s approach to shooting the scene was “quite lo-fi,” she told Weinstein, because “we couldn’t afford a Hydrocrane or fancy underwater kit.” The small crew, which included key grip Stratton Bailey and gaffer Andrew Hubbard, “didn’t use a [standard] telescopic crane because the camera had to move through the water [coming from the ceiling],” she said. “So, it really was as simple as putting an arm on our dolly and then our SFX team, which built pipes into the ceiling, poured water on Anna while the camera was in a splash bag.”

This approach was inspired by one of Yang’s favorite shots from Steve McQueen’s Hunger. “I remembered watching Hunger and really liking this one shot,” she relates to Weinstein. “Then, when I went to this master class with its cinematographer, Sean Bobbitt, he explained how he had filmed a top shot over a bed, in which the main character — Bobby, played by Michael Fassbender — was dying. The shot was really wobbly because he had an awful crane grip, so he thought it would be unusable. But McQueen loved its shakiness, which served the scene’s emotional impact,” she said.

“When I knew that we wouldn’t be using a stabilized head and that I’d be shooting on a long zoom, moving through water, I was worried at first. But then I thought that maybe this shot would have a similar emotional impact as that shot from Hunger. And I think it did.”

Underwater sequences for Nanny, including a horrifying scene where Mami Wata drags Aisha into the depths of a murky pool, were shot by Ian S. Takahashi, who trained under Academy Award-winning cinematographer John Toll, ASC (Braveheart, Legends of the Fall) and was mentored by acclaimed underwater cinematographer Mike Thomas (Thin Red Line, Cast Away). A prolific underwater DP with a lengthy list of commercial and music video credits, Takahashi’s feature film work includes The Suicide Squad and Lost City.

“Any underwater shots take a long time to get just right,” Yang said to Weinstein, “but we had to do it on an indie schedule with only had a few long takes.”

“I tried to not just be influenced by the medium that I’m working in, because I find that it just makes your work feel like an homage to other filmmakers, as opposed to a new thing altogether. I think if you’re being honest, as an artist, as a filmmaker, especially with yourself and the material, whatever style you choose will be timeless,” she said in the film’s production notes.

“Most of my horror influences are slow-burn international films: Jennifer Kent’s The Babadook, Lynne Ramsay’s We Need to Talk About Kevin, Jayro Bustamante’s La Llorona, Tomas Alfredson’s Let the Right One In, Takashi Miike’s Audition, Kim Jee Woon’s A Tale of Two Sisters… these are a handful of films that inform my horror sensibilities which aren’t necessarily always so formulaic with jump scares every x minutes and easily categorized as ‘traditional American horror.’ ”

But it was Jusu’s mother who ultimately provided the inspiration for the film. “My [mother] is the springboard of everything, she’s the springboard of this idea,” Jusu said in her director’s statement. “She did a lot of domestic work growing up, but she is a brilliant woman who had goals and dreams of her own that she had to sacrifice for the ‘American Dream.’ The entry point [to the American Dream] for a lot of Black and Brown immigrant women and Black American women is domestic labor.”

Jusu elaborated on this theme during a panel discussion for Deadline’s “Contenders Film: Los Angeles” series. “When you’re this close to the material, you can lose your mind,” she said. “It took eight-ish years for a reason. I started and stopped, I doubted myself. I thought the story was too singular, too specific. It’s a very personal story, there are pieces of my mother’s story. I’m Sierra Leonian American, and I watched my mother do jobs that were beneath her, and part of that was domestic work. I was always worried about how she was being treated in these households as a very fiercely protective child of my mother, that was the springboard,” she continued.

“But I knew I didn’t want to tell a straightforward drama about a Black woman who’s doing this domestic work,” she added. “I knew I wanted elements of horror. The darker genres allow you to tell the truth in a way that is really titillating and interesting and pulls the audience in a way that doesn’t feel preachy or pedantic.”

READ MORE: ‘Nanny’ Director Nikyatu Jusu On The Journey Of Her Film To The Screen: “When You’re This Close To The Material, You Can Lose Your Mind” (Deadline)

Jusu, a graduate of NYU film school, attributes much of her confidence as a filmmaker to having learned how to edit as well as write and direct. Yes centering Aisha as the main character was a task that continued long after principal photography, she said in the film’s production notes.

“I’ve had to navigate making sure that we linger in Aisha’s POV heavily in post-production,” she said. “It’s just so ingrained in this industry to center on whiteness, that even when you have a Black woman filmmaker who has written the Black woman protagonist, there are certain stages of this process where you have to remind everyone that this is the main character, and we are seeing the world through her eyes,” she continued. “It can be exhausting.”

Related Article
What Did I Just See? The Cinematography of “Nope” 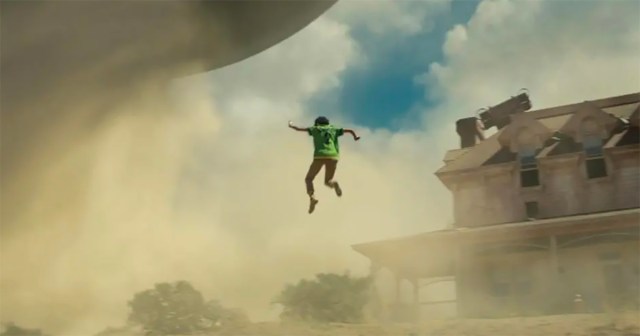 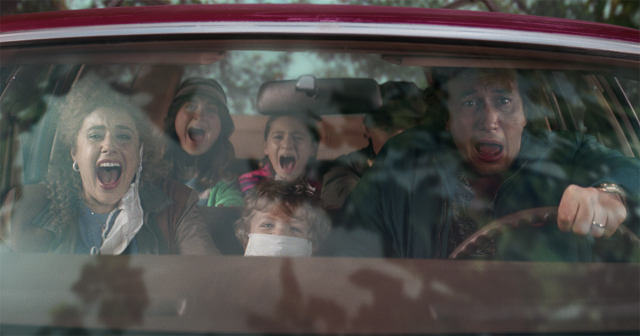 Noah Baumbach’s film adaptation of Don DeLillo’s “White Noise” is a treatise on the role of the media, and a spectacular disaster movie. 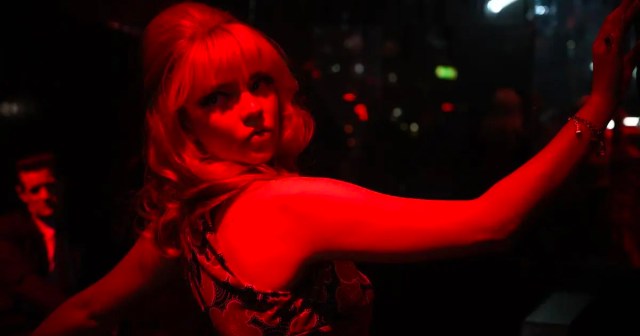 Filmmaker Edgar Wright captures Soho during the height of lockdown for his “twisted love letter” to the London media district.

Say It Five Times: Director Nia DaCosta Makes Her Own Mythology With “Candyman” 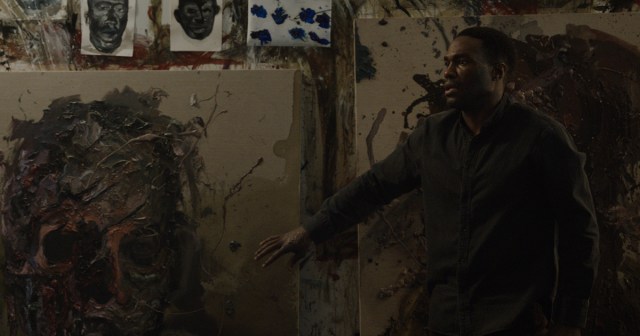 The first #1 film by a Black woman, “Candyman” is just the beginning for DaCosta, who is now working on “The Marvels” for Marvel Studios.