All the Beauty and the Bloodshed, an unconventional biopic of artist and activist Nan Goldin, is as much societal critique as a portrait and illustrates the extent to which the personal is political.

Its director, Laura Poitras, said to The Guardian’s Nadia Khomami that Goldin’s story is “a challenge to other artists“ to use their power to expose “the toxic philanthropy and whitewashing of blood money and institutions.”

The film examines the life and career of Goldin and her efforts to hold Purdue Pharma, owned by the billionaire Sackler family, accountable for the opioid epidemic. Opioid addiction has been linked to more than 500,000 deaths in the US over the last two decades.

All the Beauty and the Bloodshed won the Gold Lion at the Venice Film Festival, prompting HBO Documentary Films to acquire it for US television and streaming rights, Matthew Carey reports at Deadline.

Goldin, a photographer whose work documented LGBTQ+ subcultures and the AIDS crisis, founded the advocacy group PAIN (Prescription Addiction Intervention Now) in 2017 following her own addiction to OxyContin. The group puts pressure on museums and other arts institutions to end collaborations with the Sacklers, who have long been financial supporters of the arts.

Goldin herself said she sought to demand accountability. “They have washed their blood money through the halls of museums and universities around the world,” she told Rolling Stone’s David Fear, and made good on her promise to make the political personal.

She succeeded too. With PAIN-led protests forcing The Met, The Guggenheim, the Louvre, and other art institutions to stop accepting Sackler money and take their names off their walls, leaving only a few institutions as hold-outs — and the Sackler name permanently tarnished.

READ MORE: The Director of the Victoria & Albert Museum Says He Is ‘Proud’ of the Museum’s Connection to the Sacklers (Artnet)

But All the Beauty and the Bloodshed is about more than her fight with the Sackler family. Goldin originally planned for the documentary to just tell the story of PAIN, but after contacting Poitras to make it she was persuaded to weave her own personal life into the picture.

Poitras is best known for her Academy Award-winning 2014 documentary Citizenfour about NSA whistleblower Edward Snowden. She also made Risk, a documentary about another social and political pariah, Julian Assange.

The filmmaker started documenting Goldin’s contemporary activism, but soon found herself wanting to talk more about the rest of Goldin’s life. “There was a shift,” Poitras tells Anne Thompson at IndieWire. “As every film happens, you start to learn more, and then, ‘Oh, we need to talk about other things.’ ”

That’s when Poitras made a deal with Goldin to do a series of candid audio interviews in which the artist opened up about her history of drug abuse and domestic violence, her previously undiscussed sex work, her sister’s suicide as a teenager, and her art career — including the controversial AIDS exhibition, “Witnesses: Against Our Vanishing,” which was censored by the National Endowment for the Arts.

To illustrate these aspects of Goldin’s life, the film draws heavily on the artist’s own work, as explained by Luke Hicks at Paste Magazine. Known best for her slideshows, Goldin flips through hundreds of pictures and tells story after story — each one gripping, culminating, well-delivered, giving way to an eagerness for the next — often returning to her most famous collection of over 700 photos on 35mm from 1983-2022, titled “The Ballad of Sexual Dependency.”

“It’s my story told through my photographs — there’s not a lot of footage shot by other people,” Goldin told Artnet’s Sarah Cascone. “Poitras is telling my story in my voice, but it’s not exactly my version as I would tell it.”

READ MORE: Nan Goldin on Handing Over the Camera to Laura Poitras for a Golden Lion-Winning Documentary About Her Life (Artnet)

Nonetheless, Goldin had final cut. “Nan and I could speak really freely,” Poitras tells Thompson, “and she would have an opportunity later before it would be shared with anyone wider to see if there was anything that went too far.”

The editing team, led by Joe Bini (We Need to Talk About Kevin), “had these ideas of the interweaving of past and present and an inner and outer world,” Poitras continues. “It was very [challenging] to keep the drama and the subtlety and subtext and that storyline going. And pointing the blame where it belongs: to the Sackler family, and a society that doesn’t hold people accountable, or provide health care for its citizens.”

READ MORE: Nan Goldin Is Intense Even for Laura Poitras — and the Result of Their Collaboration Is an Oscar Frontrunner (IndieWire)

The film is also a snapshot of New York City, where Goldin rubbed shoulders with the likes of John Waters and Jim Jarmusch. “She’s as much a chief creative force as Poitras on the outcome of the film (a ‘collaboration’ they called it at the New York Film Festival premiere), especially when you consider how much of it is Goldin’s slideshows,” Hicks notes.

READ MORE: Masterful Nan Goldin Doc All the Beauty and the Bloodshed Balances the Wonder and Terror of Artistic Life (Paste Magazine)

READ MORE: ‘All the Beauty and the Bloodshed’ Review: Nan Goldin’s Remarkable Life Gets a Towering Film Befitting It (IndieWire)

According to Esther Zuckerman at The New York Times, the title of the film — conceived by Poitras — comes from the hospital records of Goldin’s sister Barbara, who died by suicide at 18. The director found that the phrase, taken from a report about what Barbara interpreted on a Rorschach test, encompassed the tragedies on display on-screen but also the celebration of resistance.

Fear says that the documentary is a “portrait of someone who’s taken family trauma, inspiration from her fellow outliers and the scars of a bohemian life, then used them to fuel a body of work that’s akin to a four-alarm fire.

“But it’s also a portrait of an activist and a major work of protest art in and of itself, sharing bio-doc screen time with footage of Goldin’s guerilla warfare against Big Pharma and calling out of bullshit. One is an extension of the other.”

READ MORE: ‘All the Beauty and the Bloodshed’ Is a Major Work of Anti-Pharma Protest Art (Rolling Stone)

Film at Lincoln Center Podcast · #436 – In Conversation with Nan Goldin

Related Article
“Navalny:” When Your Documentary Ends Up As a Spy Thriller 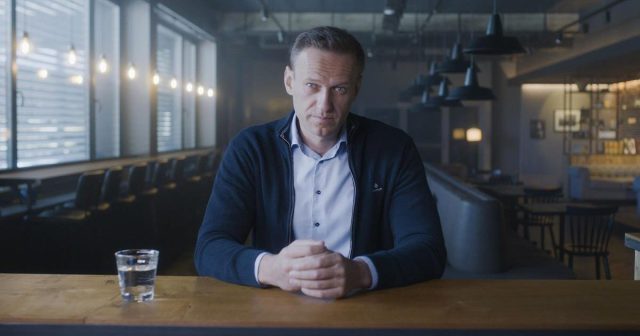